Victims of police brutality would get N102 million from Delta State. 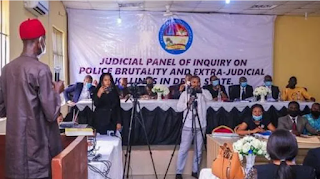 Following the acceptance of the findings of a judicial panel of inquiry into recorded instances of police brutality in the state, the Delta State government has announced that it would pay a total of N102, 450, 000 to victims of police brutality.
January a statement made only hours before the first anniversary of the #ENDSARS demonstrations that erupted throughout the nation in 2020, the Delta State government announced that a unit of the Nigeria Police called the Special Anti-Robbery Squad will be disbanded effective immediately (SARS).
Chief Patrick Ukah, Secretary to the Delta State Government (SSG), made the announcement at an Asaba press conference. Ukah said that the decision to alleviate the suffering of some of the victims was made after the findings of the judicial panel of inquiry was taken into account.
Asaba and Warri were the sites of public hearings for the judicial panel, which was launched by Governor Ifeanyi Okowa in October 2020 after receiving a total of 86 petitions. All parties were represented by full legal counsel throughout the proceedings.
This is to inform all Deltans and residents of the state that the State Government has received and taken into consideration the Report of the Judicial Panel of Inquiry, which had been tasked with receiving and investigating complaints of police brutality and related extrajudicial killings in the state.
"It should be noted that the panel was unable to offer recommendations on all of the petitions that were submitted to it since some of these petitions are still pending in different state courts." As a result, making any statements about them would be considered prejudicial. Aside from that, throughout the hearing sessions, the panel rejected several of the petitions for a variety of grounds.
For the most part, the panel was able to demonstrate instances of police brutality that resulted in the deaths of individuals and/or the deprivation of personal liberty, and as a consequence granted monetary compensation to the victims in these instances.
Similarly, the panel affirmed judgments previously issued by High Courts in the state for different instances of police brutality, judgments that have not been followed to this day, including the payment of judgement debts connected with them. "
"After taking into consideration the panel's recommendations in these two types of instances, the state government has agreed to pay the incidental claims suggested for the victims, totalling to N102,450,000.00" (One hundred and two million, four hundred and fifty thousand naira). This payment would be processed as soon as possible."
Amnesty International, in a statement, urged President Muhammadu Buhari to follow through on his commitment to reform the police. The organisation issued the demand in a statement headlined, "Nigeria: One year after the #EndSARS demonstrations, victims of police violence still have not received justice."
In spite of pledges of change, the report said, police impunity had persisted in Nigeria.
"A year on, despite the gravity of these human rights violations, not a single member of the security forces has been prosecuted, and judicial panels of inquiry established to investigate abuses by officers have made little progress," said Ms Osai Ojigho, Director of Amnesty International Nigeria, in a statement.
"President Muhammadu Buhari must follow through on his commitment to reform the police in order to put an end to the reign of impunity against which Nigerians have been protesting for many years. It is yet another evidence that Nigerian authorities lack the political will to hold accountable individuals accused of being involved for the torture and deaths of #EndSARS protestors on October 20, 2020, as well as to stop police brutality."
"Under the pretext of restoring order, horrific injuries were inflicted on hundreds of people, and at least 56 people were killed, including dozens of young people, as Nigerian security forces used unnecessary and excessive force to disperse peaceful protesters across the country," Ojigho continued. "
"It is intolerable that the administration, in the face of overwhelming evidence, continues to deny the deployment of live fire against protestors at the Lekki tollgate, precisely a year after the incident."
Amnesty International said that the investigating panels established to investigate police violence had been plagued so far by lengthy adjournments, intimidation of witnesses by police attorneys, and the failure of police personnel to attend as witnesses in their investigations. It claimed that panels in some jurisdictions failed to convene while panels in other states went on extended hiatuses.
It urged the government to put their words into action and put a stop to police impunity once and for all.
Culled:https://www.arise.tv/delta-to-pay-n102m-to-police-brutality-victims/
at October 20, 2021 No comments: