Nigerian Press Freedom Is in Danger of Being Extinguished 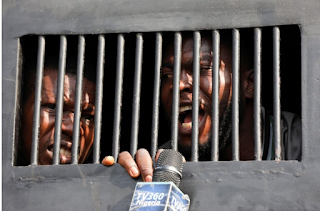 Koo, Twitter's Indian competitor, has just started advertising to Nigerians, backed by a strong brand ambassador: President Muhammadu Buhari. The endorsement comes more than two months after Buhari banned Twitter in Nigeria in reaction to the social media firm removing a provocative post from Buhari threatening violence against followers of a southeast separatist movement. The endorsement of certain media businesses is the latest step in the government's continuous campaign to stifle free speech.

The National Broadcasting Commission (NBC), Nigeria's media regulating authority, sent a letter to Nigerian broadcast stations last month directing them to minimize the country's deteriorating security situation, especially the danger posed by Boko Haram and banditry. NBC defended its stance by claiming that reporting on these problems has a propensity to incite more violence. This argument would be plausible if the government had not been gradually eroding free speech rights. For instance, after the #EndSARS demonstrations against police brutality last October, NBC penalized media groups for covering the events.

Nigeria is now rated 120 on the World Press Freedom Index, down five places from its 2020 rating. According to Reporters Without Borders, Nigeria is "one of the most hazardous and challenging nations in West Africa for journalists," and the situation seems to be worse. Following the Twitter suspension, NBC ordered that all social media platforms and internet broadcasting service providers operating in Nigeria apply for broadcast licenses. This was followed by a very contentious modification to the NBC Act aimed at suffocating media companies. These measures have sparked widespread outrage among Nigeria's main media outlets, with each station running front-page advertising advocating against excessive media control in the nation.

Restriction of free expression poses major difficulties for civil society in a political climate where the government has shown a propensity for authoritarian behavior. Inability to report the news freely may result in a scenario in which the government determines what constitutes truth or fiction. This has severe implications, particularly for a nation experiencing its most serious security problems since the 1967 Civil War.

For over a decade, Nigeria's North East area has been the scene of an insurgency that has claimed over 40,000 lives and displaced over two million. The area continues to bear the brunt of this conflict's devastation, especially among women, children, and other vulnerable populations. Meanwhile, the country's North West area is plagued by banditry: over 2,000 individuals have been kidnapped since January, including hundreds of school children. Continuous reporting on these conflicts informs people about their intensity and effect on Nigerians. With this knowledge, citizens may continue to put pressure on their government to handle insecurity more effectively. Reduced reporting on crisis situations in the country effectively silences millions of victims who would otherwise have no voice at the national level and trivializes their sufferings for the sake of avoiding embarrassment for the administration.

The incapacity of the Buhari government to control the country's insecurity is deteriorating. Self-determination demands are increasing in the South West, while the South East is on the brink of an insurrection headed by advocates of a revived Biafran separatist movement. Suppression of Nigerian media seems to be a desperate effort to keep Nigerians unaware of how little progress the administration has made toward curbing insecurity.

If the government succeeds in its current assault on journalistic freedom, there is no reason to believe it will be the last. With general elections approaching in two years, rules and restrictions restricting the media may make it more difficult to report on voting irregularities—particularly if they are committed by the governing party. According to others, the increased emphasis on limiting free expression is part of the governing party's strategy to consolidate power ahead of the 2018 elections.

Many allies of the government have warned that incorrect reporting of conflict news—whether on social or mainstream media—could aggravate the country's profound divides, prompting citizens to take law into their own hands. While this is a possible danger, the nation currently has regulations in place to handle it and penalize violators. For instance, the Cybercrimes (Prohibition, Prevention, and Punishment) Act (2015) tackles risks to cyberspaces, including internet use and security, with the goal of preventing and fighting cybercrime. Additionally, the Defamatory and Offensive Publications Act (1966) criminalizes defamation. The government's priority should be to execute these laws rather than to continue eroding journalistic freedom.

President Buhari said in his 2015 inaugural address that democracy is the preferred path to national development and vowed to "actively work the democratic system." A democratic government's responsibility is to protect free expression and ensure basic liberties. It is critical that the government tries to meet these obligations.