Showing posts with the label police canine
Show All 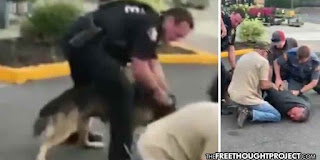 A demanding video was once shared with this week displaying a site visitors give up for a suspected DUI quit with a police officer forcing his K-9 to maul a man as quite a few human beings held him down. The trooper first noticed Zaragoza riding a crimson GMC Sierra east on U.S. Highway 12, partly crossing the lane three times, in accordance with a likely purpose affidavit. Zaragoza then "Suddenly" stopped his vehicle, the affidavit said, he bought out and refused the trooper's orders to get on the ground. As he walked to the store, Zaragoza was once wrestled to the ground via the trooper, and a bystander assisted the trooper in keeping him down till backup arrived. During the war on the ground, Zaragoza refused to put his hands at the back of his back, the affidavit said, and a Yakima police officer introduced in a police canine who bit Zaragoza's leg till his fingers had been cuffed, the affidavit said. According to Sanchez,
Post a Comment
Location: 822 N 1st St, Yakima, WA 98901, USA
Read more
More posts