Showing posts with the label Woodlynne cop
Show All

Cop Walks Up to Innocent Teen, Randomly Blasts Him in the Face With Pepper Spray 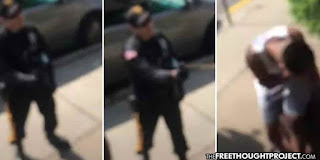 A few youngsters were spending time with companions prior this month, on their own property, when officials with the Woodlynne police officer approached them. Without incitement, Woodlynne cop Ryan Dubiel arbitrarily pulled out his pepper shower and shot one of the teenagers in the face with the splash before showering a few others. At the point when they decided to declare their entitlement to stay quiet when the officials asked them inquiries, official Dubiel snapped. At the point when another youngster didn't quickly jump up and begin doing everything the official asked, he pulled out his pepper splash and soaked a teenager legitimately in the face, hitting an additional 20-year-old behind him.  As the video appears, the teenager sitting on the stoop is attempting to message his sibling, who is his legitimate watchman. Dubiel advises him to put his hands behind his back and before he can go along, Dubiel releases the concoction weapon into the high schooler's face. &qu
Post a Comment
Location: Woodlynne, NJ, USA
Read more
More posts