Showing posts with the label ¨Abolish the Police¨
Show All 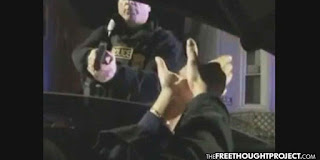 As the accompanying video shows, David Nin, 20, discovered that being blameless and not violating a law is no safeguard against police raising to potential savage power. Nin's startling, and almost life-finishing experience unfurled in Spring, anyway, video of the occurrence has just barely been discharged. As the video shows, Nin is begging the official not to shoot him, holding his hands out and advising him to put the cuffs on him. Nin obeyed everything the official said and in spite of this, he was ambushed with a savage weapon, pointed right at his face.  When requested to leave the vehicle, he did as such and was placed into binds without occurrence. Normally, police guarantee they were in the zone in view of a shooting that happened before that day, which had officials nervous. Police say the driver, "didn't stop at first upon the actuation of the official's blue lights, and the vehicle out of nowhere went into converse and started to change headings"
Post a Comment
Location: Methuen, MA 01844, USA
Read more

SAVE A LIFE + PAY IT FORWARD INITIATIVE 'Your funding will provide the Police Brutality Matters team the funds necessary to implement our Save-a-Life Program which will allow us to continue traveling to K-12 schools ,  colleges, and universities nationwide to teach our young people how to stay alive .
Post a Comment
Location: United States
Read more
More posts