Showing posts with the label Walgreens
Show All 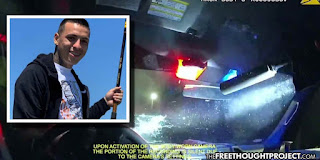 Simply two days after the president's name for public executions, a Vallejo, California police officer carried one out. He turned into unarmed and on his knees while the nevertheless-unidentified officer opened hearth thru the windshield of his police cruiser and murdered him - execution-fashion - with a bullet to the again of his head. Monterrosa becomes shot at some point of what the branch is now calling a half to kneel saying, "He was stuck inside the back of the head.". As the video indicates, the officer rolls up at the scene and he's so scared that he would not even attempt to get out of the car before he starts capturing. An officer recommended that Monterrosa became fleeing, saying: "He ran, he ran!" as though that justifies the execution.
Post a Comment
Location: United States
Read more
More posts